June 3, 1999 – Although refusing to call it surrender, Yugoslavia’s government on Thursday accepted a Western-backed peace plan for Kosovo that requires Yugoslav and Serb forces to withdraw from the province and provides for an international peacekeeping force to facilitate the return of refugees. 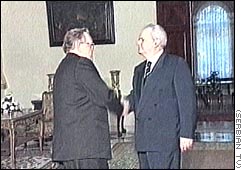 U.S. and NATO officials remained wary, however, saying Yugoslavia will have to live up to its promise before NATO airstrikes will cease.

By late Thursday, attacks were reported in the Serbian town of Markovo, as well as near Kosovo’s provincial capital Pristina and in Prizren.

The skies over Belgrade were quiet.

„Yugoslavia accepts the document for peace brought by the highest representatives of the European Union and Russia,“ the official Tanjug news agency said Thursday.

Milosevic’s Socialist Party said it supports the peace plan because „it brings establishment of peace and a halt to the criminal bombing.“

„I don’t believe that there was any kind of surrender because we are not ready and we will never be ready to surrender Kosovo as an integral part and spiritual cradle of the Yugoslavian nation,“ Vladislav Jovanovic, Yugoslavia’s charge d’affaires at the United Nations, told Associated Press Television News.

Ahtisaari said the agreement means NATO’s air war against Yugoslavia could be over soon.

„I’m in no position to say whether it’s one day or two days or three days, but it is a very short period of time,“ he said.

But Ahtisaari warned the peace process was far from complete.

„Bear with me if I’m not jumping here with enthusiasm because there’s a lot of hard work that needs to be done,“ he said.

Ahtisaari said that the U.N. Security Council now needs to move forward to provide a mandate for the security presence, the peacekeeping force that will replace Yugoslav troops in the Serbian province of Kosovo.

He said the talks with Milosevic were „very businesslike, with no voices raised.“

NATO officials, who began the air war March 24, said they were encouraged by the news. But they said Yugoslavia must begin to implement the plan — including the withdrawal of troops from Kosovo — before NATO would stop the bombing.

Ahtisaari briefed EU leaders in Cologne, Germany, on Thursday evening, while Chernomyrdin returned to Moscow to discuss the talks with his government. Ahtisaari, Chernomyrdin and U.S. Deputy Secretary of State Strobe Talbott were due to meet again in Helsinki, Finland, on Friday.

„In the upcoming days, we can expect a halt in the bombing,“ Chernomyrdin said.

Chernomyrdin told reporters that the basic result of the peace plan, issued by the world’s top seven industrialized nations and Russia, involves putting the peace efforts under the auspices of the United Nations. He said a resolution must be passed by the U.N. Security Council to carry out the agreement.

News of Milosevic’s concurrence came shortly after Serbia’s parliament voted to accept the Western and Russian-backed proposal — including a „fundamental“ role for NATO troops in a peacekeeping force. 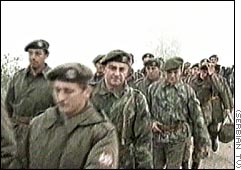 A date for Serb withdrawal was not included in the plan

The vote followed weeks of bombardment by NATO aimed at forcing Milosevic — now charged with war crimes by a U.N. tribunal — to make peace in Kosovo, a province of Yugoslavia’s dominant Serbian republic.

The plan includes an international security presence to ensure the safe return of hundreds of thousands of ethnic Albanian refugees and a troop withdrawal in Kosovo, where NATO says the Yugoslav army has carried out a campaign of repression against civilians.

NATO spokesman Jamie Shea said the alliance would have no comment until its governing body, the North Atlantic Council, could review the deal.

As Yugoslav leaders deliberated, there were no immediate reports of NATO strikes around Belgrade. But scattered bombing in other parts of Yugoslavia was reported overnight. And NATO estimated Thursday that the war has cost the Yugoslav armed forces more than 10,000 dead and wounded.

Bombing would stop only when NATO sees evidence that Yugoslavia has begun to implement the plan’s terms, he said.

„If that is what Belgrade accepts, then we do have a good basis for securing the objectives of our campaign,“ Cook said.

Milosevic’s decision to accept the G-8 plan followed an affirmative vote in the Serbian parliament — a signal that Milosevic wanted public acceptance for the plan.

The agreement was accepted by a vote of 136-74 amid heated debate. A minority party spokesman called it „capitulation,“ and delegates sometimes came close to fistfights during the debate.

„We will never accept aggressive troops in any part of Serbia,“ said Vojislav Seselj, a deputy premier and leader of the hard-line Radical Party, which opposed the G-8 proposal.

„The most important is the fact that forces would come under the mandate of the United Nations and flag of the U.N.,“ Draskovic said. That allows Yugoslavia to maintain its sovereignty, said Draskovic, who was fired from the deputy premier’s post after publicly criticizing Milosevic’s conduct of the war.

If NATO finds Yugoslavia’s acceptance satisfactory, an advance guard of 16,000 allied troops is in place in surrounding countries and ready to move into Kosovo. 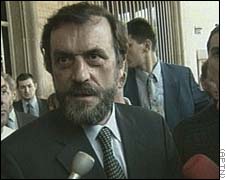 „This is a great day for the Serbian nation“ — Draskovic

Eventually, NATO plans to provide about 50,000 troops for a Kosovo peacekeeping force. NATO will move „expeditiously“ to put as many as 30,000 troops in Macedonia alone, Shea said.

The agreement is similar to the failed Rambouillet accords, which Kosovo’s ethnic Albanian representatives accepted — but Milosevic rejected — in March.

The major difference between the two pacts is that Rambouillet called for a peacekeeping force in Kosovo composed strictly of NATO troops, while the G-8 proposal calls for its peacekeepers to have a mandate from the U.N. Security Council.

Ahtisaari’s trip to Belgrade with Chernomyrdin marked the first direct talks by a Western diplomat with Milosevic since the NATO bombings began.

Sticking points in peace talks included the makeup of the peacekeeping contingent in Kosovo: Yugoslavia insisted it be under United Nations control, while NATO held out for a force under its command. 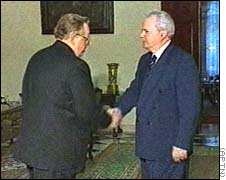 The Yugoslavs also fought NATO’s demand for a total pullback of its 40,000-strong army in Kosovo.

The peacekeepers will also have to help resettle nearly 1.5 million displaced Kosovars, mostly ethnic Albanians. Nearly two-thirds of those have fled Kosovo.

„I hope this works out in the way that it should, so we can begin getting the refugees back as soon as possible,“ British Prime Minister Tony Blair said.

The refugees were pushed out, NATO says, by a Yugoslav campaign against ethnic Albanian civilians and against the rebel Kosovo Liberation Army, which has fought pitched battles with Yugoslav troops in recent days.

A KLA spokesman told CNN on Thursday that it would honor a cease-fire based on the G-8 principles.

But Pleurat Sejdiu, a KLA political representative, said any peacekeeping force must be under NATO command and Yugoslav troops must leave. „Only then can we say it is a victory for the Western democracies,“ he said.

A U.N. tribunal on war crimes indicted Milosevic and four other officials on war crimes charges last week in connection with reported atrocities in Kosovo. Rubin said the G-8 agreement did not include Milosevic’s surrender as a term for ending the war.

But he said Milosevic’s rule has been „disastrous“ for Serbia, and „It remains our view that all countries, including Serbia, should submit all war criminals to the jurisdiction of the court.“