WASHINGTON March 28, 1999 – An American F-117 stealth fighter went down in Yugoslavia Saturday night, the first allied loss in the four-day Balkan conflict, even as NATO officials announced a broad new phase of the air assault on Serbian targets. Serbian television shows footage of a U.S. plane shot down in Yugoslavia during air strikes against military positions. The footage showed burning wreckage and a close-up of identification marks including the figures AF-806 and insignia reading „Air Combat Command“. The Pentagon says the pilot was rescued. The pilot of the F-117 was rescued by an American military search-and-rescue team six hours after his plane went down, according to Administration officials. An image taken from Serbian television shows the wreckage of a U.S. stealth fighter. 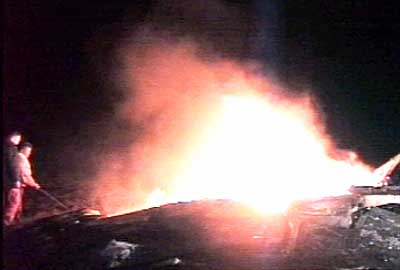 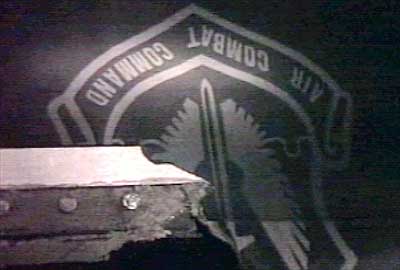 A close-up of identification marks reading „Air Combat Command“. The Pentagon says the pilot was rescued. 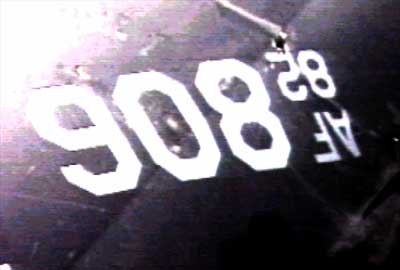 A close-up view of the wreckage taken from footage shown on Serbian television.

Another view of the wreckage of the stealth fighter taken from footage shown on Serb television. 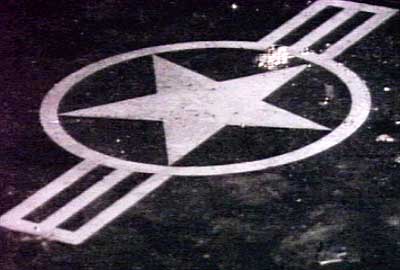 Part of the wreckage shown on Serbian television. 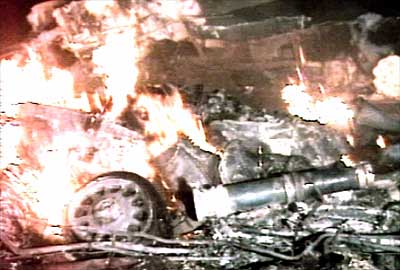 Burning wreckage of a plane thought to be a U.S. stealth fighter. The Pentagon says the pilot was rescued. 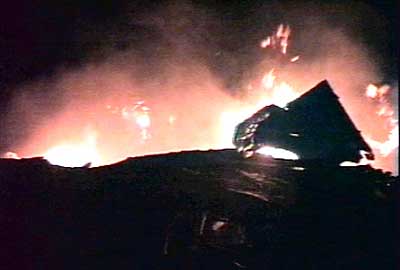 Burning wreckage of what is thought to be a U.S. stealth fighter. The Pentagon says the pilot was rescued.

Authorities in Belgrade claimed that Serbian air defenses had shot down the radar-evading stealth aircraft, one of the most advanced weapons in the American arsenal. There was hostile missile activity in the area where the plane was operating, one Pentagon official said Saturday night, but there was no independent confirmation that the plane was brought down by Serbian fire.

The official Tanjug news agency in Yugoslavia said the F-117 was brought down late Saturday near Budjenovci, 35 miles northwest of Belgrade.

Although pictures of the fiery wreckage were shown on Serbian and American television for hours tonight, Administration officials did not confirm the loss of the aircraft until the pilot was safely out of Serbian air space. The Pentagon would not discuss why the plane went down.

President Clinton Saturday night expressed relief that the pilot, who was not identified, was safely snatched from Serbian territory only hours after his plane went down. He said that the United States and NATO were broadening the goals of the four-day-old military operation in Yugoslavia to include attacks on equipment and troops of the Serbian army and police forces.

„As I’ve said from the outset,“ Clinton said in a statement released by the White House late Saturday night, „this military operation entails real risks. However, the continued brutality and repression of the Serb forces further underscores the necessity for NATO forces to persevere.“

Reports of the loss of the American aircraft stunned White House officials, who had spent most of the day consulting with European leaders about expanding the military mission in Yugoslavia. Appalled by numerous reports of atrocities in Kosovo, including mass executions, deportations and forced marches, NATO and United States officials accelerated a decision to attack Serbian forces in the field, officials here and in Europe said.

The loss of the F-117 was a propaganda coup for the Serbians, who have absorbed four days of heavy pounding from American and NATO bombs and missiles and the loss of at least five MIG fighters in air-to-air combat. It was the first time one of the $43 million F-117’s had gone down in hostile action. They performed flawlessly in hundreds of missions over Iraq in 1991.

Serbian television broadcast images of the burning wreckage of an aircraft that bore the distinctive markings of the F-117 Nighthawk, with tail numbers indicating it was from the 8th Fighter Squadron at Holloman Air Force Base, N.M.

Besides the loss of the plane in Serbia, the United States faces a loss of the secret technology that allows the F-117 to evade detection. That technology includes the composite materials used for the outer surface of the plane, which absorbs radar instead of reflecting it back to defensive missile sites.

Any secrets lost to the Serbs could find their way to the Russians, who have been supporting Serbia.

The expansion of the allied air strikes announced Saturday marked a new phase in the four-day-old campaign against the Yugoslav military. Until now, air strikes had chiefly targeted air defenses and military infrastructure, not Yugoslav troops and armor that could be used to kill ethnic Albanians in Kosovo.

This week, when the United States and NATO initiated the attacks, President Clinton said the West had a „moral imperative“ to try to halt the slaughter of civilians in Kosovo. Clinton warned Slobodan Milosevic, the Yugoslav president, that if he did not cease the repression in Kosovo, NATO would „seriously damage“ Serbia’s capacity to make war.

Saturday, NATO and the United States moved to make good on that threat, setting plans for attacks by allied warplanes that would take aim at supply depots, communications facilities and troop concentrations located south of the 44th parallel in Yugoslavia. The area includes all of Kosovo and a substantial portion of Serbia south of Belgrade.

„Our aim is to strike at heavy weapons, which are of course what are used to bombard villages and kill people,“ said Jamie Shea, a NATO spokesman in Brussels.

But officials in Washington said that NATO is not yet sending low-flying combat ground-attack planes or helicopters to hit Serbian troops in Kosovo. While there are signs that NATO attacks have weakened some Serbian air defense systems, low-flying aircraft would still remain vulnerable to Serb ground fire, and the current weather in the Balkans has been too poor to permit such operations, officials said.

And while the cause of the downing of the F-117 is not yet known, allied war planners likely will treat Serbian air defenses with more respect in coming days.

The White House and NATO officials in Brussels announced the escalation of the air war and the shift in strategy this afternoon after a series of conversations among President Clinton, Prime Minister Tony Blair of Britain, President Jacques Chirac of France, Chancellor Gerhard Schröder of Germany and Prime Minister Massimo D’Alema of Italy. Later, Chirac also contacted the Russian Government in an attempt to restart talks with the Serbs toward a diplomatic settlement of the conflict.

„There was total unity that the campaign was moving as planned and that it was important to move to a new phase of the air campaign, including focusing on forces in the field,“ said David C. Leavy, a White House spokesman.

„President Clinton believes that Slobodan Milosevic’s continued repression and continued intransigence remain an obstacle to resolving this crisis and thus it was necessary to move forward in broadening the scope of the air assault,“ Leavy said. Milosevic is the President of Yugoslavia, of which Serbia is the dominant part.

A senior Clinton Administration official said that the reports of Serbian violence were numerous and credible and had triggered the intensified air campaign.

„The continuing brutality made it an easy call to broaden and deepen the attack,“ the official said.

Another official said that the decision to go ahead with the second phase of the air war was moved up by several days because the humanitarian disaster unfolding in Kosovo is far worse than any previous campaign against ethnic Albanians by Serbian forces.

„The Serbs have been torching villages,“ the British Defense Minister, George Robertson, said in London. „There are reports that the Serbs are bombing villages to the point of obliteration. There are clear signs now that an all-out Serb offensive against the Albanian population has started.“

Robertson accused Milosevic of being a „serial ethnic cleanser.“

Shea cited reports that large groups of Kosovo Albanians — conspicuously lacking adult men — have been spotted under the guard of Serbian forces. „Dark things are happening,“ he said.

Despite the alarming reports and the pleas from some in Kosovo for more forceful intervention, Administration officials insisted that they were not planning to use American or NATO ground troops to halt any killings and punish Milosevic’s forces.

„There is no consideration by NATO or any of the allies for the introduction of ground troops,“ Vice President Al Gore said in response to a question while campaigning in New Hampshire. „I believe that we can achieve our objectives with the use of air power.“

In Belgrade, for the first time, people heard large explosions before air-raid sirens sounded, suggesting that Yugoslavia’s air defense system has been damaged around the capital, as NATO has said it was.

Early in the day, Belgrade television broadcast images showing the city almost deserted by shoppers Saturday after heavy overnight missile raids aimed at military targets on the outskirts of the city.

Stinging chemical fumes wafted over parts of the city Saturday after allied warplanes bombed a rocket fuel depot in the Ibarska Magistrala area in the southern suburbs.

The air campaign has been conducted until now using cruise missiles and precision-guided bombs dropped from high-altitude aircraft. Any serious effort to destroy tanks, artillery pieces, trucks and mobile ground forces would require lower-flying aircraft like the tank-killing A-10 Warthog and ground-attack helicopters.

But United States officials indicated that they were not yet prepared to employ such weapons in the new phase of the air combat because of their increased vulnerability to ground fire and surface-to-air missiles. Instead, aircraft already involved in the campaign — F-16’s and F-15E’s — will be used to attack the new set of targets in southern Yugoslavia.

Earlier Saturday, a White House spokesman said that NATO had begun to attack ground units of the Yugoslav army. But Pentagon officials said later that the flights had not yet occurred because of concerns over weather and Serbian air defense systems.

President Clinton said in his weekly radio address Saturday that Milosevic was conducting a „brutal military offensive“ against civilians and that allied forces must „stay the course“ to prevent the war in Kosovo from spreading.

„Serb troops have continued attacks on unarmed men, women and children,“ Clinton said. „We must, and we will, continue until Serbia’s leader, Slobodan Milosevic, accepts peace or we have seriously damaged his capacity to make war.“

But there were no visible signs Milosevic was backing off. Serbian television broadcast programs with patriotic themes along with coverage of NATO attacks and news of protests against them in Greece and Russia.

In the Serbian province of Kosovo, the center of the conflict that led to the attacks that began on Wednesday, Serbian troops continued their rampage against the ethnic Albanians, burning homes and villages and rounding up ethnic Albanian men.

„This is not happening because of NATO,“ Robertson, the British minister, said. „This violence was going on before we began.“

„The weather is not very good,“ Air Commodore David Wilby of Britain said in a Brussels briefing early Saturday. In operations that ended before dawn Saturday, he said, „some of the airplanes turned back because of the weather, but manned aircraft did get through to their targets last night.“

In all, 249 allied planes took to the air between Friday and early Saturday, he said. Bombs dropped from aircraft and the warheads of unpiloted cruise missiles struck military targets around Belgrade and the southeastern Serbian city of Nis, and in six areas in and around Kosovo, officials said.

NATO officials have given only sketchy accounts of damage from the air raids because they say it will take time to analyze photographs taken after the attacks. And without people on the ground, they say, it is impossible to provide accurate estimates of casualties.

Robertson and other officials warned Milosevic Saturday not to try to retaliate by attacking international peacekeepers in neighboring Bosnia or Macedonia. About 12,000 allied soldiers in Macedonia are preparing for missions to enforce a peace agreement in Kosovo if, as the allies hope, the bombing forces Milosevic to accept one.

The allies, he added, will do their best to see that Serbian authorities who may be responsible for atrocities against civilians are prosecuted for them by the international criminal tribunal in The Hague.