Since the 19th century, the history of Yugoslavia has been a series of partitions, break-ups, and regional or international wars. In 1815 only Montenegro was an independent principality, while the other provinces were still under Ottoman or Austro-Hungarian rule. The Balkan wars of 1912-13 completed the dismantling of the Ottoman empire, which was followed in 1918 by the break-up of Austro-Hungary. Among the new states that emerged was the Kingdom of Serbs, Croats and Slovenes and Croatians (Yugoslavia), which comprised the two kingdoms of Serbia and Montenegro, plus the former imperial territories of Croatia, Bosnia-Herzegovina, Slovenia and Dalmatia. The multinational Federal Republic of Yugoslavia was created in 1945 and lasted until the wars of 1991-95, which gave rise to ethnic cleansing and the break-up of the country. 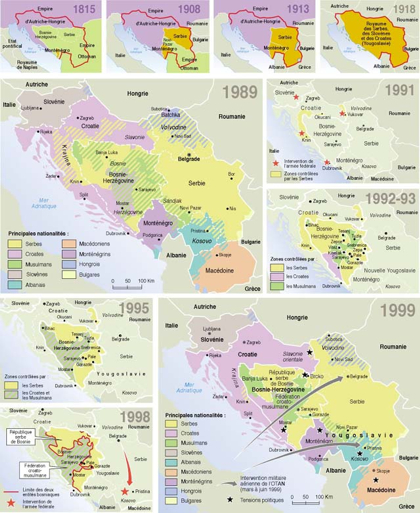 The changing shape of Yugoslavia (1815-1999)
http://mondediplo.com/maps/yugoslaviamdv49