March 28, 1999 – Explosions boomed through Belgrade Sunday and air raid sirens sounded, the morning after the dramatic rescue of a NATO pilot who survived after his warplane went down in Yugoslavia. Officials said the pilot, who was not identified, was in good condition and was being debriefed at a NATO base in Aviano, Italy on Sunday. 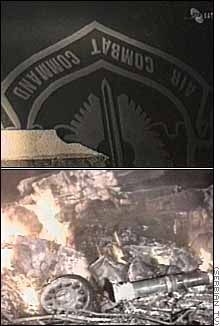 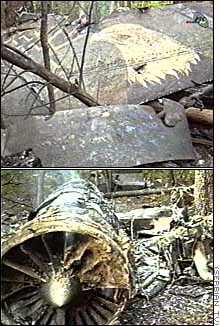 Although the Serbs said his stealth F-117A fighter jet was shot down, NATO officials did not confirm that. They said investigators are attempting to determine whether the plane malfunctioned and crashed.

Pentagon officials say the rescue operation was launched immediately after word was received at 3 p.m. EST Saturday that a stealth Nighthawk plane was missing.

The White House said in a statement that President Clinton was „pleased with the news that our pilot has been rescued successfully“ and „tremendously proud of the skill and bravery of the pilot“ and those who participated in the rescue.

Late Saturday, Serbian television showed video of what it said was an F-117A stealth fighter-bomber that had been shot down by Yugoslav forces approximately 40 kilometers (30 miles) west of Belgrade.

The aircraft’s identification number, AF-806, was clearly visible in the television report.

Pentagon spokesman Ken Bacon said that after the plane was reported missing NATO forces „concentrated on nothing else but the search and rescue“ of the pilot.

As Operation Allied Force entered its fifth day, NATO fficials did not confirm whether the explosions heard in Belgrade came from fresh NATO airstrikes.

Clinton said „continued brutality and repression“ by Serb forces underscore a need for the NATO operation to go forward. He said he supports a decision by NATO to move to a new phase of the air campaign which will include a wider range of targets as well as forces in the field.

Yugoslav officials in Belgrade showed international journalists what they said was damage to non-military targets from the NATO bombing and said its air defenses remained intact.

CNN’s Brent Sadler was taken to a factory in Rakovica, just west of Belgrade, which Yugoslav officials said was hit by a cruise missile.

The large facility, which the officials said manufactures engines for civilian vehicles, appeared heavily damaged, with hundreds of its windows broken out.

Nearby, a family with three children huddled in an air raid shelter. The father said he was a worker in the engine factory.

The local media has reported that the attacks damaged schools, homes and hospitals.

Sadler was also shown a military communications site in Rakovica, which Draskovic said had been struck daily since the NATO bombings began last Wednesday.

Yugoslav officials said there were military casualties from the bombings, but did not specify how many.

The chief of the Yugoslav Army information service said at a news conference Saturday that Yugoslav air defenses remained in good shape despite the bombings and could still shoot down NATO aircraft.

NATO attacks on Belgrade resumed before dusk Saturday, with the launch of Tomahawk cruise missiles from U.S. warships, one from the USS Philippine Sea and another an hour later from the destroyer USS Gonzales.

Fireballs have lit up the night sky in Belgrade since the attacks began and a forest near a popular suburb has been set ablaze. Residents have for the most part deserted the city’s streets and headed for underground shelters.

Fuel has been restricted to essential services. City buses and trams are still running, but with few riders.

Air raid sirens also went off Saturday in Podgorica, the capital of Montenegro.

The pro-Western Montenegro, which along with Serbia is one of two republics making up the Yugoslav federation, has tried to remain neutral during the airstrikes. 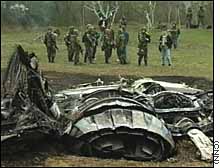 The helicopters did not cross the border.

Two U.S. F-15s shot down two Yugoslav MiG-29s that violated Bosnian air space Friday evening, said a NATO official. Local and NATO authorities are searching for the pilots, one of whom parachuted out of his plane, according to eyewitnesses. The wreckage of one has been found. A third aircraft escaped and returned to Yugloslav airspace, said sources.

A total of five Yugoslav planes had been shot down, according to NATO officials.