Yugoslav troops began pulling out of Kosovo yesterday and NATO suspended its 11-week air campaign as the vanguard of an international force, including U.S. troops, geared up on the borders of the battered province for deployment as peacekeepers as early as today. 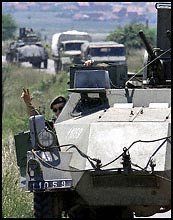 The first convoys of trucks, buses and mobile weapons carrying Serbian police and security forces rolled northward, some accompanied by Serb civilians fearful of remaining in Kosovo. At the same time, cameras on NATO planes showed empty tank transports heading into Kosovo from other parts of Serbia, in apparent preparation for a withdrawal of Yugoslav armored units.

In a rapid, orchestrated sequence of events, British Lt. Gen. Mike Jackson, commander of the peacekeeping force, notified NATO Secretary General Javier Solana that the Yugoslav pullout had begun, the first signal for compliance with a peace agreement signed Wednesday that obliges all Yugoslav forces to get out of Kosovo in 11 days.

Solana then directed the NATO military commander, Gen. Wesley K. Clark, to call off the airstrikes – although they could be resumed if compliance falters – and informed U.N. Secretary General Kofi Annan of his decision. The U.N. Security Council then quickly approved a resolution authorizing deployment of the NATO-led peacekeeping force and establishment of an interim civil administration to restore order in Kosovo and help its ethnic Albanian people return to their homes.

President Clinton, who like other U.S. and alliance officials had responded cautiously when Yugoslav President Slobodan Milosevic last week accepted a political framework for ending the war, finally allowed himself a few celebratory words, praising U.S. and NATO air crews and saluting the allies for their steadfastness. He also made a point of thanking President Boris Yeltsin for the Russian diplomatic efforts that led to the peace agreement, despite Russia’s strenuous objection to the bombing campaign.

„Unnecessary conflict has been brought to a just and honorable conclusion,“ Clinton said in a televised address last night from the White House.

But he had harsh words for the Yugoslav leader, whom he accused of bringing down needless suffering on the Serb people. Addressing those people, he indirectly suggested they get rid of Milosevic in order to join their southern European neighbors in a rebuilding campaign that the United States is willing to help with.

„As long as he remains in power, as long as your nation is ruled by an indicted war criminal, we will provide no support for the reconstruction of Serbia,“ Clinton declared. „But we are ready to provide humanitarian aid, and to help to build a better future for Serbia too, when its government represents tolerance and freedom, not repression and terror.“

The first of 1,900 U.S. Marines who will be among 7,000 U.S. troops in the peacekeeping force disembarked in Greece and headed for Skopje, Macedonia. Military officials said they expect it will take three days to assemble all the Marines and their equipment, including tracked personnel carriers that will be ferried into Kosovo on flatbed trucks. There was at least one report of a firefight between Yugoslav troops and separatist Kosovo rebels, a sign of the dangers facing peacekeepers as they enter unfamiliar terrain filled with mines, booby traps and guerrillas from secessionist Kosovo Liberation Army as well as the retreating Yugoslav troops.

The task facing the peacekeepers and the civilian administration to be installed by the United Nations will not be accomplished quickly. With Kosovo’s building stock, roads, utilities, water supplies and electric lines all damaged in the conflict, its fields unplowed this year and its people angry and suspicious, the province faces months and perhaps years of hardship and uncertainty.

Jackson said the mission of the 50,000 peacekeepers will be to restore „basic law and order“ and to make possible a massive relief effort planned by the European Union, the United States and other countries. He pledged to be „evenhanded“ in protecting civilians – Serbs as well as ethnic Albanians – but several journalists who entered Kosovo from Belgrade reported encountering fearful Serbs fleeing the province.

Kosovo is the southernmost province of Serbia, the dominant republic in the Yugoslav federation. But before the conflict, 90 percent of its 1.8 million inhabitants were of Albanian stock, many of them eager to break away and form an independent state allied with neighboring Albania.

Secretary of State Madeleine K. Albright said not all the 850,000 refugees from Kosovo in Albania or Macedonia, or the estimated 500,000 ethnic Albanians stranded inside the province, will be able to return home before winter. Albright, meeting with her counterparts in Cologne, Germany, said the U.N. High Commissioner for Refugees will assume responsibility for aiding refugees, the Organization for Security and Cooperation in Europe for organizing elections and training police and the European Union for rebuilding the infrastructure.

Even as his troops scrambled to evacuate the province he had vowed to hold at any cost, he went on television to hail the outcome as a success because the peace agreement and the U.N. Security Council resolution stipulate continued Yugoslav sovereignty over Kosovo.

„We did not give up Kosovo,“ he said.

The cessation of the bombing raids prompted expressions of relief and satisfaction among NATO’s 19 member governments, which managed to sustain a fragile consensus despite deep strains that threatened to split the alliance and even to topple governments in Germany, Italy and Greece. This was the first actual combat ever undertaken by the alliance in its 50 years, and by going into action outside the territory of its members the alliance changed its nature and its purpose.

Rather than a defensive grouping aimed at hemming in Soviet power, NATO has evolved into a pan-European security organization, facing costly, long-term troop commitments in Bosnia and now Kosovo in an effort to stabilize Europe’s most volatile region.

„All this would not have been possible without the cohesion and the determination of all allies,“ Solana said. „We managed to stay together because we were motivated by the same values and the desire to stop something that should never have happened.“

He insisted that NATO harbors no antipathy toward the estimated 200,000 Serb residents of Kosovo. „I hope the Serbs will stay in their homes,“ he said. „NATO forces will defend their rights as much as the rights of other ethnic communities in Kosovo.“

Solana emphasized that NATO is willing to support a new $30 billion initiative, endorsed by the Group of Eight major powers and the European Union, to finance long-term economic reconstruction in the Balkans with the aim of defusing the region’s volatile traditions and bringing its fratricidal populations into the mainstream of a prosperous and peaceful Europe.

European leaders, embarrassed by U.S. domination of the air war and the fact that the United States again took the lead in quelling a European conflict, vowed to carry their share of the burden in bringing a program of reconstruction to Kosovo and the rest of the Balkans.

„We want to make sure Kosovo gets the help it needs,“ said British Prime Minister Tony Blair. „Our job will not be properly done until that happens.“

In Cologne, foreign ministers from the European Union, Russia, and NATO countries including the United States pledged to support a „stability pact“ for southeastern Europe, but they did not commit specific resources. A conference of donors will be convened shortly, the usual mechanism for coordinating aid among different countries, international aid organizations and the World Bank.

Albright, echoing Clinton’s earlier comments, said that because „the United States clearly bore the bulk of the military campaign“ it was „appropriate for the Europeans to bear the brunt, to take the lion’s share“ of the reconstruction costs.

At the United Nations, 14 of the 15 Security Council members voted for the Security Council resolution that ratified the outcome of the air war. China, still smarting over the bombing of its embassy in Belgrade, abstained.

An official go-ahead by the United Nations was one of the conditions insisted on by Yugoslavia before it would agree to withdraw its soldiers and police in favor of the international force. China and Russia, both permanent council members that have been harshly critical of NATO’s bombing campaign, also insisted on a Security Council endorsement of the international force as the price of their supporting a peace agreement.

Until Russia agreed last week to accept NATO’s terms for ending the air war, the United States had maneuvered to keep the Kosovo issue out of Security Council jurisdiction for fear of a Russian veto of any planned intervention in the affairs of Yugoslavia, a sovereign country that insisted Kosovo was an internal matter.

In addition to authorizing the international force’s entry and operations in Kosovo, the resolution specifies that the United Nations should be in control of the anticipated large international civilian presence that will be required to oversee the return of Kosovo refugees and reconstruction of the province’s shattered infrastructure.

It calls on Annan to appoint a special representative to take charge of civilian operations and „coordinate closely with the international security presence“ to ensure that the civilian and military efforts are working in harmony. Annan said he expects to name his representative shortly.

The Chinese objected to the resolution’s call for all parties, including the international force, to cooperate with the International Criminal Tribunal for the Former Yugoslavia as it seeks to investigate possible war crimes in Kosovo. However, China failed to win any changes to the resolution. In the end, it agreed to abstain rather than veto in exchange for language stating that the Security Council, rather than NATO, has the „primary responsibility“ for maintaining peace and security.

Correspondents William Drozdiak in Brussels, R. Jeffrey Smith and Molly Moore in Skopje, Macedonia, and Steven Mufson in Cologne, Germany, and staff writers Dana Priest and William Branigin in Washington and John M. Goshko at the United Nations contributed to this report.