June 17 – What happened in the dank cellar of the Mahalla e Muhaxhereve police station in downtown Pristina remains unknown. But when Serbian Interior Ministry police shed their blue-gray uniforms and abandoned the building as British troops took control of it three days ago, this is what they left behind: A bed frame with a belt tied to one post; a mattress pocked with bullet holes; heaps of hand-forged brass knuckles; piles of wooden batons, one with the Serbian words „mouth shutter“ carved into it; knives of every size; and mounds of heavy metal chains. 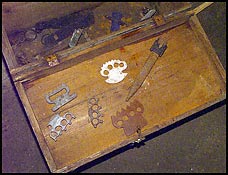 British troops discovered this box containing weapons of torture in a school Serbian police used as their headquarters in Pristina. (AFP)

And photographs. Dozens of police mug shots of women, young children, and men of all ages – all with sad eyes and most with disheveled hair.

„It’s the photographs of the people and not knowing what happened to them that gets you,“ said British Army Capt. Andy Reeds, who led reporters through the grisly chambers today. „Are these people still alive and walking the streets?“

Residents of Pristina, the Kosovo capital, said police packed hundreds of people into the building in mid-May. For three days and nights, they said, screams of pain and terror came from the four-story building, forcing many in the neighborhood to retreat to the back rooms of their apartments to block out the sound.

The police station has provided the biggest cache of documents yet for investigators with the International Criminal Tribunal for the Former Yugoslavia, which has indicted Yugoslav President Slobodan Milosevic and four senior aides on war crimes charges stemming from the terror campaign carried out by government security forces against Kosovo’s ethnic Albanian population.

Tribunal officials carted boxes of documents out of the station Wednesday night, and tribunal spokesman Paul Risley said today they could provide „evidence essential to proving chain-of-command information both from Belgrade and back up the chain to Belgrade. We believe these documents will be helpful in proving the indictment against Milosevic and his four associates.“

When NATO bombs destroyed the headquarters of the Interior Ministry police in Pristina on April 7, the Mahalla e Muhaxhereve station became the base of the city’s police command. British soldiers who took up positions outside the station last weekend spent two days urging the police to leave the building before they finally departed under the military withdrawal deadline agreed to by Belgrade. They said said the police shoved boxes upon boxes of documents out the back windows of the building and set them on fire during their hasty exit.

„I think there are many places like this, and we’re going to find more and more of them,“ said Reeds, who added that British soldiers have not yet been able to enter numerous suspect buildings in Pristina for fear of mines and booby traps. „It’s very, very creepy.“

Besides the documents, other forms of evidence left a far more chilling impression of what may have gone on inside the onetime school dormitory turned police station. „We don’t think this place was designed to kill people,“ Reeds said. „We think people were arrested, brought here to be interrogated in a manner that might be called torture and then brought to other places.“

In the damp, dark confines of the basement are four stark rooms. Dried red-colored stains run down the walls of one cubicle behind a barred door. On the floor lay an array of wooden batons, one splintered in half, along with a black ski mask and piles of heavy chains.

In another chamber was an open box containing a dozen crude sets of brass knuckles cut from jagged pieces of metal. In another, a massive pile of auto license plates, believed to have been ripped from stolen automobiles or removed from the cars of ethnic Albanians fleeing Kosovo. On a desk were vials of an anti-nerve gas agent.

Hundreds of packaged condoms littered desk tops in offices upstairs. In the locker room – where war crimes tribunal investigators found hundreds of ethnic Albanian identity cards – pornographic magazines, some with bizarre photographs of werewolves groping nude women, were strewn about the floor. In one office, a nude pinup hung next to a Serbian Orthodox religious icon. In another office, a table was littered with empty bottles of cheap tequila and gin, shot glasses and a half-dozen long knives.

Pristina residents, some of whom had been detained in the station before the NATO bombing began in late March, said the building was used as an interrogation center from which detainees would either be transferred to one of two jails in the city or released.

But it was during a three-day period during the NATO airstrikes – May 18 to 20 – that people who live near the station said the fearful atmosphere that always surrounded it turned to one of terror, when as many as 500 people who had been delivered in police wagons were jammed into the basement.

„We could hear the screaming,“ said Blerina Ullokoqi, 14, who lives two houses from the station. „They were yelling, ‚Oh, God!‘ ‚Mama!‘ Things like that.“ She said she was so traumatized by the screams that she ran to the room on the farthest side of the house and tried to cover her ears.

Burim Krashniqi, 14, who lives a few houses away, said his father was arrested, interrogated and beaten at the station during the same period, before he was eventually released. British military officials said they have been given numerous similar accounts by neighborhood residents and former detainees.