Nato suspended its air campaign against Yugoslavia after 78 days of bombing sorties over the Balkans. An accurate assessment of the campaign is impossible due to the nature of the conflict. The following assessment of the toll of the conflict is based on official statements and reports issued by Nato, the Yugoslav government, United Nations agencies or other international bodies. 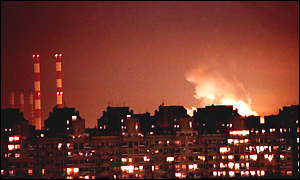 Nato has told journalists that it is unable to estimate how many civilians died – but has provided estimated figures for military casualties. For full Kosovo coverage see the Kosovo Crisis special report. Around 5,000 members of Yugoslav forces lost their lives and a further 10,000 were wounded though it is unclear how these battlefield assessments have been made. These deaths have come through attacks on military equipment, installations and battalions in the field. Other targets have included barracks and government buildings.

Nato’s fateful strike on the Chinese embassy, killing three officials, came when it failed to hit a federal ministry linked to the war machine.

Belgrade reports that Nato’s bombing has cost the lives of 462 soldiers and 114 Serb special police officers.

An equally disputed figure is that for civilian deaths.

The alliance says that this has been the cleanest war ever fought with the minimum number of innocent civilians killed – though no figures are provided.

But State-run media in Serbia reports the civilian death toll as high as 2,000.

The ministry of information in Belgrade has published detailed accounts of Nato’s blunders on its Web site and focused attention on incidents including the two disastrous attacks on refugee convoys near to Djakovica in Kosovo.

While Belgrade has attacked Nato for criminal acts, it has not released any figures for civilian deaths at the hands of Yugoslav forces in Kosovo.

The only Nato losses were two pilots killed in an Apache attack helicopter training accident.

A pilot of a US Stealth fighter-bomber that came down in Serbia survived and was rescued by special forces.

The strikes began with just 30 flights on 24 March. By the last week of the air campaign the alliance had 36,300 personnel in the Balkans and across Europe playing a part in up to 700 sorties every day.

Roughly a third of these sorties were bombing missions while other aircraft offered reconnaissance, mission co-ordination, air defences and mid-air refuelling facilities.

While Nato’s much-vaunted technology has been shown to be fallible, journalists including the BBC’s John Simpson in Belgrade have reported witnessing cruise missiles hitting targets with remarkable accuracy.

Nato has lost two aircraft in unclear circumstances – but Yugoslavia claims the total to be much higher.

On 31 May alone, the official news agency Tanjug reported that Yugoslav air defences had brought down four alliance aircraft – and even provided a picture of a divebombing plane on its website.

Nato may have lost a number of experimental reconnaissance drones over Kosovo.

At the beginning of the conflict, the alliance regarded military installations and equipment as legitimate targets.

By the end of bombing, Nato bombers had also hit bridges, ministries, radio masts and even a state-controlled television station.

According to Nato figures, it has completely destroyed around a quarter of the Yugoslav air force’s 450 aircraft – including a large number of MiG fighters.

Around a quarter of the Yugoslav army’s 300 to 400 tanks and 400 to 500 personnel carriers were destroyed in Kosovo.

Up to a third of 600 artillery pieces were destroyed but Nato’s supreme European commander General Wesley Clark said that many more had been hidden, rendering them useless.

The alliance has described nine of Serbia’s 17 military airfields as severely damaged. Nato has been less successful against Serbia’s powerful air-defence batteries.

The conflict has ended with around a third of these destroyed and Nato commanders insisting that any remaining systems within Kosovo be pulled back into Serbian territory.

One of the most potent images of the early stages of the campaign was the hundreds of Belgrade citizens occupying bridges in candle-lit vigils. Nato says that around 55 rail or road bridges were destroyed or heavily damaged – though President Jacques Chirac of France said he had vetoed attacks on Belgrade bridges.

The first bridge to be destroyed was a key Belgrade-northern Serbia road bridge over the Danube in Novi Sad.

In the first incident, Nato admitted it had destroyed a train when it attacked a bridge 250km (155 miles) south-east of Belgrade.

Serbia’s oil refineries are now „functionally destroyed“, including the installations in Novi Sad and Pancevo.

Of this figure, 800,000 fled or were expelled from Kosovo after the start of bombing on 24 March.

The rest are believed to be living in mountains and forests, too afraid to go home.

The UNHCR believes that around 30,000 Serbian civilians have been displaced northwards, a number which is expected to rise.

Estimates of deaths as a result of human rights abuses and war crimes are currently impossible to independently verify.

Nato says 225,000 men are missing within Kosovo and at least 6,000 have been killed in summary executions.

The European Union estimates that it will cost at least $4bn (£2.5bn) over three years to rebuild Kosovo. While President Bill Clinton has said he will block efforts to aid Yugoslavia while President Slobodan Milosevic is in power, the European Investment Bank estimates the total bill for Balkans reconstruction to be at least $32bn (£20bn). The United Nations refugee agency predicts it will need at least $38m (£24m) a month to deal with the crisis.