March 24, 1999 – Scores of NATO cruise missiles, along with fighter planes and stealth bombers, pounded Yugoslavia on Wednesday night, following through on a long-standing threat to attack if Serbs refused to sign a peace plan for Kosovo. At least four more cruise missiles were fired from U.S. ships in the Adriatic Sea early Thursday, hours after the first airstrikes began. 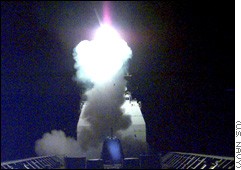 „By acting now, we are upholding our values, protecting our interests and advancing the cause of peace,“ Clinton said.

In his speech, Clinton referred to a map with numerous red dots that he said represented sites in Kosovo attacked by Serbian forces and red arrows showing refugee movements.

CNN Correspondent Brent Sadler reported seeing several orange fireballs that sent showers of sparks into the black sky near the Kosovo provincial capital of Pristina, beginning at about 8 p.m. local time (2 p.m. EST). The city was plunged into darkness shortly afterward, and sporadic automatic weapons fire was heard across the city.

At least two explosions resounded near Belgrade in the direction of a military base. Belgrade television said an aircraft factory north of the city had been damaged.

In addition, a weapons factory 100 kilometers from Belgrade was said to have been hit.

In the Yugoslav republic of Montenegro, an army barracks in Danilovgrad was reported in flames. Witnesses also said there was an airstrike on a small military airfield in the hills above Podgorica.

Montenegro’s pro-Western leader, Milo Djukanovic, blamed Yugoslav President Slobodan Milosevic for the attacks, calling them „the tragic consequences of an irrational policy of confrontation with the entire world.“

Yugoslavia declared a state of war after the strikes began. Deputy Prime Minister Vuk Draskovic said all Serbs were now at war with NATO.

„We are not ready to make any difference between the bombs of Adolf Hitler from 1941 and the bombs of NATO,“ he told Britain’s Channel 4 News. „We are completely innocent.“

The Yugoslav army said more than 20 targets in seven towns were attacked in the first hour of the assault, but air defense units had not been damaged, according to the official Tanjug news agency.

Tanjug also said there had been civilian casualties, including women and children who had taken refuge in a military barracks.

Reporters were not immediately able to get to the targets to see the effects of airstrikes. About 25 international journalists, including four CNN producers and photographers, were detained by police at the Hyatt Hotel in Belgrade. They were later freed.

Serbian television reported a NATO plane had been shot down northwest of Pristina. But NATO’s supreme commander in Europe, Gen. Wesley Clark, said no NATO fighters had been hit.

Pentagon officials said they believed at least two Yugoslav MiG-29 fighter planes had been shot down.

„We are attacking the military infrastructure that President Milosevic and his forces are using to repress and kill innocent people,“ Cohen said. „NATO forces are not attacking the people of Yugoslavia.“

U.S. ships and a British submarine launched Tomahawk cruise missiles from the Adriatic Sea and were followed by U.S. B-52 bombers that fired air-launched cruise missiles over the Adriatic, Pentagon sources told CNN. The B-52s had flown out of England. German and French planes also joined the air assault.

The Pentagon also confirmed that two B-2 bombers took part in the attack, marking the first time the stealth bomber has been used in combat. The Air Force says the $2.2 billion batwing bombers are nearly invisible to radar and are each capable of dropping satellite-guided, 2,000-pound bombs on 16 targets.

The NATO airstrikes came one day after senior U.S. envoy Richard Holbrooke failed in a last-minute attempt to persuade Yugoslav President Slobodan Milosevic to agree to a U.S.-drafted peace plan for Kosovo, which would grant local autonomy to ethnic Albanians but not independence.

Serb leaders have continued to reject a key element of that plan: allowing 28,000 NATO-led peacekeepers into the province to police the peace.

NATO Secretary-General Javier Solana blamed Milosevic for prompting the airstrikes, saying the international community had pursued a diplomatic solution for months, to no avail.

„The time has come for action,“ Solana said in a statement.

„Only firmness now can prevent greater catastrophe later,“ Clinton said. „Kosovo’s crisis is now full-blown, and if we do not act clearly it will get even worse.“

Shortly after the attacks began, Russia, which has long opposed such strikes, recalled its NATO ambassador from Brussels. At the United Nations, Russia summoned an emergency meeting of the U.N. Security Council and ordered an immediate halt to NATO military action.

Russian President Boris Yeltsin called the attacks „outright aggression against Yugoslavia“ and said his nation reserves the right to take „adequate measures including military ones to ensure its security and that of Europe.“

The Chinese government echoed Russia’s call for an end to the airstrikes.

Sun reiterated that China opposes „any country’s intervention in internal affairs of another country for any reason,“ and that China also opposes actions which circumvent the authority of the United Nations.