Home Bloggen NATO Declares the Air War Is Over

June 20 – NATO formally declared an end to its air war against Yugoslavia following the departure of the last Yugoslav troops from Kosovo today, as leaders of the world’s seven leading industrial democracies and Russia announced a major effort to rebuild the war-battered Serbian province. 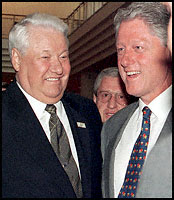 German Chancellor Gerhard Schroeder, whose nation holds the Group of Eight presidency until the end of the year, said he would organize another summit in the Balkans this autumn to stress the group’s determination to bring stability and democracy to the volatile region.

„Peace will only be possible there if, after the silencing of the weapons, we move quickly to promote the kind of economic and political integration in the Balkans as we enjoy in the West,“ Schroeder said.

The annual summit ended as the last of 40,000 Yugoslav army and Serbian police forces withdrew from Kosovo, towing broken-down tanks and other vehicles across the northern border into Serbia about 11 hours earlier than a mandated midnight deadline.

„At 1 o’clock this afternoon the commander [of the NATO peacekeeping force in Kosovo], Lt. Gen. Mike Jackson declared … that, with the exception of a few stragglers, all Yugoslav uniformed forces have now withdrawn from Kosovo,“ NATO spokesman Lt. Col. Robin Clifford told reporters in Pristina, the province’s capital.

With the Yugoslav government having met the withdrawal timetable it agreed to with NATO commanders on June 9 in Macedonia, alliance Secretary General Javier Solana issued a statement announcing he had „decided to terminate with immediate effect the air campaign.“ The air assault against Yugoslavia, which lasted 78 days, was suspended on June 10 as the first Yugoslav troops began to leave.

In another sign that the threat of armed conflict might be diminishing, Western negotiators reached an agreement with the Kosovo Liberation Army that calls on the ethnic Albanian guerrillas to turn over their heavy weapons, U.S. national security adviser Samuel R. „Sandy“ Berger told reporters here.

The NATO force in Kosovo and the KLA „have agreed on an understanding of demilitarization and transformation“ of the guerrillas, Berger said earlier.

A senior Clinton administration official said a tentative accord was reached early this morning following negotiations in Macedonia involving senior KLA officials and top Western aides, including State Department spokesman James P. Rubin. Secretary of State Madeleine K. Albright sent Rubin to the talks because of the working relationship he has established with Thaqi.

The accord would prohibit the guerrillas from carrying weapons in many parts of Kosovo and require them to put any weapons larger than a side arm or a hunting rifle in storage within the next 30 days, NATO officials said. In addition, the agreement orders the KLA to maintain a cease-fire, to defer to NATO peacekeepers on security issues and to expel foreign members of their organization.

Russian President Boris Yeltsin, who joined President Clinton and the six other leaders for the summit’s final day, said Moscow wanted to collaborate with the West on building a new and lasting peace in the region after disagreeing vehemently with NATO’s decision to bomb Yugoslavia, a Slavic-dominated nation that shares deep historic and cultural ties with Russia.

Russia’s new apparent willingness to work with the United States and its European allies was signaled on the eve of the three-day summit, when U.S. and Russian negotiators reached agreement on the terms under which 3,600 Russian troops will serve in the NATO-led peacekeeping force in Kosovo. The pact, which calls for Russian soldiers to operate in sectors controlled by France, Germany and the United States as well as helping to run the airport at Pristina, the Kosovo capital, prescribes an unprecedented degree of military cooperation between Moscow and the Western alliance.

Schroeder, Clinton and other leaders emphasized that Russia’s involvement was essential in any effort to create and guarantee peace in Europe. They said that the strategy of seeking Moscow’s help in persuading Yugoslav President Slobodan Milosevic to pull his forces out of Kosovo – which was endorsed at NATO’s 50th anniversary summit in Washington two months ago – had clearly paid off.

The leaders pledged they would cooperate with institutions such as the European Union, the 54-nation Organization for Security and Cooperation in Europe, and the United Nations in forging a „stability pact“ for Yugoslavia and its neighbors.

„We consider this stabilization process to be one of the major political and economic challenges ahead of us. We declare our readiness to take strong action to achieve all the objectives of the stability pact,“ they declared in a final statement.

What remains unclear is the extent to which the major powers are willing to back up their commitments with hard cash. The European Union’s executive commission estimates that it may take at least $2 billion to rebuild Kosovo and enable more than 1 million ethnic Albanian refugees to acquire basic food and shelter in their home villages.

But commission experts believe that long-term costs of economic reconstruction for all of former Yugoslavia and its neighboring states may require investments as high as $30 billion over the next six to eight years.

A donors conference is scheduled to take place next month. The 15 nations of the European Union have declared their willingness to absorb most of the reconstruction costs, particularly since the United States bore most of the expense for carrying out the bombing campaign.

While Russia urged that Yugoslavia’s Serbian population should share in the reconstruction aid, the United States and Europe insisted they would not participate in rebuilding any of the infrastructure destroyed by NATO’s bombs as long as Milosevic remained in power.

In a concession to Yeltsin, the final statement by the summit leaders did not include a specific prohibition on reconstruction aid to the Milosevic government. But the United States, France, Britain, Italy, Canada, Germany and Japan made it clear that they would resist providing any assistance that would help prop up Milosevic and his ruling clique.

„Reconstruction aid, reestablishment of economic structures and reincorporation into Europe need democratization, and that is not possible with Milosevic,“ Schroeder said. Nonetheless, there were significant nuances among the various leaders regarding distinctions to be made between reconstruction aid and humanitarian relief.

British Prime Minister Tony Blair, who adopted the strongest position during the bombing campaign and was the most forceful advocate of sending ground troops if necessary to defeat Milosevic, said the Serbian population must share part of the blame for brutality and repression waged by their political and military leaders against Kosovo’s ethnic Albanians.

He indicated that until Serbs bring down Milosevic or compel him to surrender to the U.N. war crimes tribunal in The Hague to face charges, they should not expect to receive Western aid.

„The more we see what has happened in Kosovo, the more we see that the Serbian people have got a responsibility to make Milosevic culpable,“ Blair said. „They cannot walk away from these crimes.“

Blair urged that Western funds should be funneled to those front-line states that supported NATO in the conflict. He cited above all Albania and Macedonia, two of Europe’s poorest countries, for absorbing hundreds of thousands of refugees despite their economic and social fragility. But he also mentioned Bulgaria and Romania for allowing NATO planes to use their airspace.

Other leaders, however, said it was important to show sympathy and generosity to defuse anti-Western resentments in Yugoslavia. „The Serb citizens are victims and to give some humanitarian relief is a matter of helping people,“ said Canadian Prime Minister Jean Chretien. „If there is a big problem of food and starvation this winter, I would not say no because of Milosevic.“

Schroeder expressed a similar view. „We have to differentiate. If somebody is cold, you give him a blanket even if he is your enemy. If he is starving, you give him food.“

Clinton, who was described by members of other delegations as curiously detached from the summit proceedings, seemed to hover somewhere between the two schools of thought. Berger said the United States would probably be willing to supply food and medicines through the Red Cross or other international relief agencies.

Even though virtually all Serbian and Yugoslav forces have left Kosovo, tensions between Serbian and ethnic Albanian civilians remained high in many towns and communities where Serbs remain. In the northern Kosovo city of Mitrovica – one of the last to be vacated by Yugoslav forces – civilian Serbs and ethnic Albanians had set up roadblocks in their respective sides of town, refusing to permit access to each other’s territory. French paratroops placed a line of tanks between the two feuding sides. „We’re in the middle, and we don’t know what to do,“ said Cpl. Beyrouti Talal, who was manning the NATO checkpoint.

Correspondent Molly Moore in Pristina and staff writer Charles Babington in Cologne contributed to this report.