The Migrating to PowerPoint 2010 from PowerPoint 2003 Guide is now available as free download from the Office Support Website. PowerPoint 2010 looks very different from PowerPoint 2003, so we created this guide to help you minimize the learning curve. Read on to learn key parts of the new interface, discover free PowerPoint 2010 training, find features such as Print Preview or the Options dialog box, understand how to exchange presentation files with people who don’t yet have PowerPoint 2010, and find out how to get access to macros and other advanced features. Click a link or an image below, and the guide opens as a PDF file in Adobe Reader. You can then view the guide, print it out, or save it for later use. 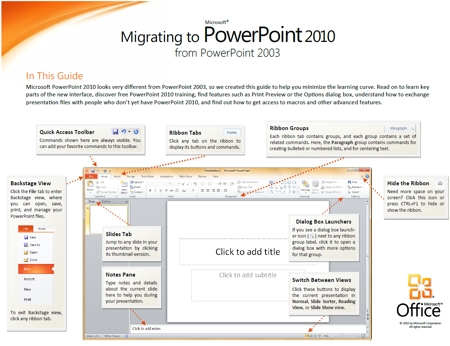