March 18, 1999 – The ethnic Albanian delegation at the Kosovo peace talks in Paris on Thursday signed a peace document that the international community had hoped would help end the separatist conflict in the Serbian province. 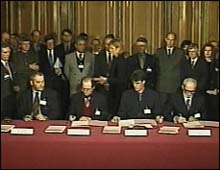 But the Yugoslav delegation refused to accept the proposed peace document and stayed away from the signing ceremony.

The signature of the Kosovo Albanian delegation means that international pressure is now mounting on the Yugoslav federal government and on Serbia, the dominant republic in Yugoslavia, to finally agree to the autonomy accord.

The proposed peace agreement would have given the ethnic Albanian majority in Kosovo significant local autonomy but not the kind of outright independence that the rebel Kosovo Liberation Army has been fighting for.

The peace document – drafted by the six-nation Balkan Contact Group that includes the United States and Russia – also calls for NATO-led troops to enforce the peace deal.

However, that provision has been repeatedly and firmly rejected by Yugoslav President Slobodan Milosevic and the Serbian delegation.

The United States underlined Thursday that, even though only one party signed the peace document, the event was sending an important signal to the world.

„I think that will make clear for all to see that the Kosovo Albanians have made the courageous decision to choose peace even while their people are being attacked and killed on the ground today,“ said U.S. State Department spokesman James Rubin in Paris.

NATO has repeatedly threatened airstrikes against Yugoslav targets should Belgrade be the only party to hold up a peace agreement.

Unconfirmed reports suggest that the co-chairmen of the Paris peace talks, French Foreign Minister Hubert Vedrine and his British counterpart Robin Cook, may now ask the Yugoslav delegation to return to Belgrade to reconsider the proposal.

In Washington, the Clinton administration expressed grave concern about what it called large-scale Yugoslav troop movements in and near Kosovo.

It warned it would act if Belgrade unleashes an offensive against the ethnic Albanians, who make up 90 percent of Kosovo’s population.