And in another first, Germany’s Luftwaffe fighters flew alongside British Royal Air Force jets to attack Serb military targets. German Chancellor Gerhard Schröder said the Nato attacks were to “prevent a humanitarian catastrophe“. He said Germany had decided to take part in the Nato attack as a last resort after Serbian President Slobodan Milosevic mounted a renewed offensive against Kosovo Albanians. 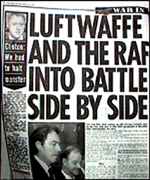 How the Sun reported the historic joint action

„The government did not take the decision lightly, after all this is the first time since World War II that German soldiers have been deployed in combat,“ he told the nation in a sombre television address.

„I call here and now on President Milosevic to stop the fighting immediately in Kosovo.“

He said the West was ready to cease its strikes if Belgrade agreed to sign the Kosovo peace deal.

„We are not waging war, but we must bring about a peaceful solution in Kosovo, even if that requires military force,“ Mr Schröder added.

‚The world has changed‘

The German Tornado fighters, which took off from a base in Piacenza, Italy, joined the first wave of Nato air strikes.

A report in the UK’s Sun newspaper said the job of the Luftwaffe pilots had been to jam Serb radar and missile defences clearing the way for British and US jets to bomb their targets.

It quoted a senior MoD official saying: “The world has changed since the Second World War. Our pilots are playing a vital role – but so are the Germans and they are working in perfect harmony.“

‚Germany has come of age‘

Throughout World War II the RAF battled against the Luftwaffe, but since then the two forces have often trained together in Germany where there are RAF bases.

However German planes had never flown in anger until Wednesday’s Nato strikes.

British Member of Parliament Michael Fabricant, of the Anglo-German group of MPs, welcomed the joint action. “Germany has come of age,“ he was quoted saying.

“While no one should forget the past. It is good to see the Luftwaffe flying alongside the RAF in a humane cause.“

Germany also has some 3,000 troops standing by in Macedonia to take part in a peacekeeping force in Kosovo.